It’s always fascinating to see what an outsider will make of a particular region’s artistic output, and what he or she as a curator deems capable of contributing to a larger idea – as opposed to simply culling the good from the mediocre and creating a sprawling, meaningless group show.

To its credit, Arcadia University Art Gallery’s group exhibitions almost always project the finger-on-the-pulse, bigger-picture approach, and none more so than the gallery’s 24th “Works on Paper” biennial.

In this case, the outsider was Cornelia Butler, chief curator of the department of drawings at New York’s Museum of Modern Art, who has selected 48 works by 40 artists from 883 entries.  With them, she has created an impressively succinct but also fluid view of the kind of art being made here that is both peculiar to this area and also relevant to the art world at large. 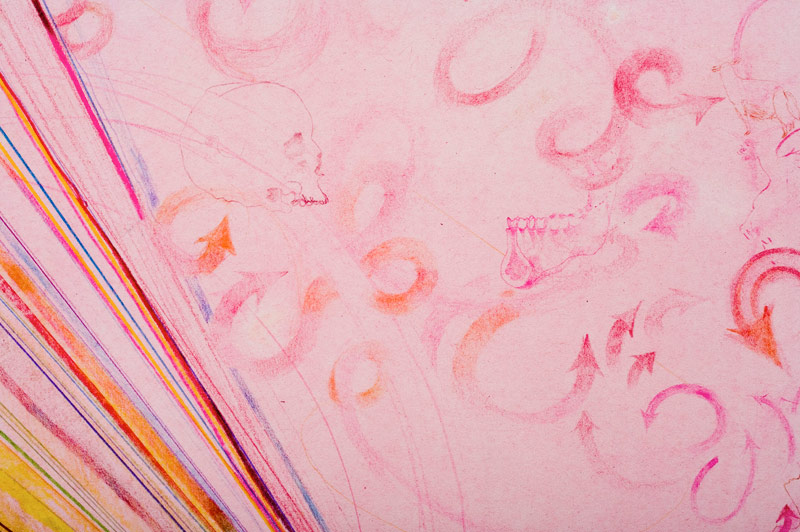 She did not take the biennial’s title literally, either – only about half the works constitute drawings or prints in the traditional sense.  The paper in this gallery has been deployed for, among other things, James Johnson’s cardboard Dell computer box with an exquisite diorama of a country scene inside; Linda Yun’s two stacks of letter size paper; one with a blue stripe painted around it, another dusted pink with makeup; and John Schlesinger’s inkjet print of an overhead light fixture in a shaped bronze frame. (There’s a healthy dose of sculpture and photography in this show.)

There is also a staggering variety of actual drawing on paper, from Robert Chaney’s bleak little drawings of what appear to be cropped views from a window (of telephone poles, edges of buildings, tips of branches) to Michelle Oosterbaan’s phantasmagoric colored-pencils drawings of dream-like, floating images, to Randall Seller’s tiny renderings of a futuristic village.

For a show of this size – a mere 48 works – its turns out, really push the limits of this smallish exhibition space – the installation is crisp and coherent.  Works that are predominantly black-and-white with complex compositions are in close proximity, for instance, including Astrid Bowlby’s densely patterned drawings and Stuart Rome’s photograph of dense foliage.

Sculptural forms and two-dimensional ones are situated so as to suggest dialogues, such as the playful one between the webbed cardboard globe-shaped sculpture by Thomas Vance and Richard Ryan’s large inkjet print of what look like strips o f 35mm film tossed into the air, or the more unsettling conversation between Gabriel Marinenez’s pile of blackbird-shaped confetti and Judith Schaechter’s linocut of a girl with flowers streaming out of her mouth.

Finally, this is not a show about individual. Its’ an exhibition that stretches the eye and the mind and makes more of paper than you ever thought possible.